A majority of normal individuals (>80%) have four parathyroid glands. Parathyroid glands are endodermal in origin and are derived from third and fourth pharyngeal pouches.

The superior pair develops from the fourth pharyngeal pouch and is most commonly located near the posterior and middle aspects of the thyroid laterally.

The inferior parathyroids originate from the third pharyngeal pouch and are found at the inferior poles of thyroid or in the thyro-thymic ligament.

Thecolor of parathyroid glands is dependent upon fat content, degree of vascular congestion, and number of oxyphil cells.

Parathyroid glands can vary in weight from a few milligrams to more than 70 mg (average: around 35 to 55 mg).

The parathyroid glands consist of parenchymal cell, fat cells and fibrovascularstroma. The parenchymal cells are usually arranged in nests and cords, nourished by a rich capillary network.

The functional cells of the parathyroid are mainly of chief cell type although another cell populations (oxyphil cells, clear cells and transitional oxyphil cells) are also found.

Chief cells are polygonal in shape and contain a slightly eosinophilic cytoplasm and the small round nucleus.

Clear cells are form a form of chief cells with abundant cytoplasmic glycogen, these are usually seen in parathyroids of embryos and fetuses and their number significantly declines with age. 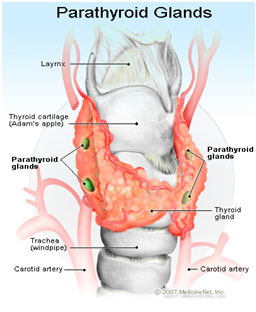 The major function of the PTH is calcium homeostasis mainly in bone and kidney. In bone PTH causes the release of calcium by bone resorption and in kidney, PTH enhances renal tubular calcium resorption and expression of 1- alpha hydroxylase that converts inactive vitamin D to active vitamin D (1, 25-dihydroxyvitamin D) in intestine that increase calcium absorption 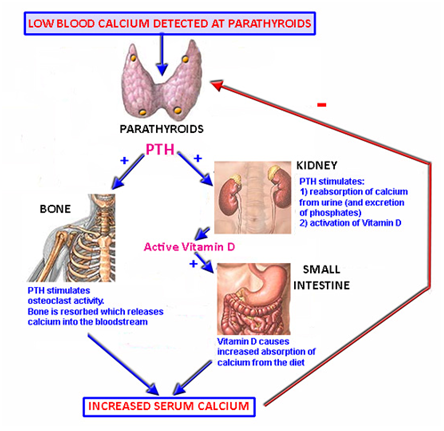